Jim Farrelly, newly elected ROW person of the Year 2018 paid a visit to the school on Friday January 26th when he met many of the present pupils, teachers and past pupils. Jim had an informal chat with current pupils and imparted words of wisdom from which the students will surely benefit in the years ahead. As always, John Murray was present with his trusty camera and he sent us a few snaps to remind us of the occasion. Thanks John. 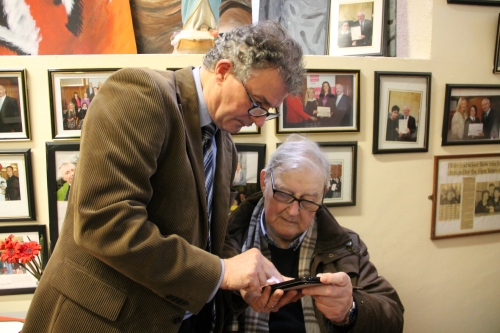 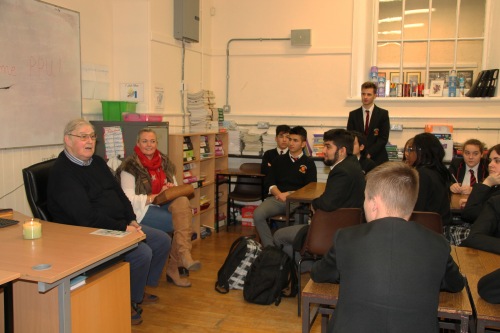 Jim holds forth with the transition year class

Annual Mass for Deceased Past Pupils

The Annual Mass for deceased Past Pupils of the school was said in St. Andrews Westland Row on Sunday December 3rd 2017. The chief celebrant was the Papal Nuncio, Fr. Jude Thaddeus Okolo and he was assisted by the Administrator Westland Row, Fr. Enda Cunningham, school Chaplain Fr. Eugene McCarthy and Deacon Dermot McCarthy. Past pupils who died during the year were Noel McKenna, John Doran, Thomas Malone, Adrian Ryan, Eamonn Corrigan and Paul Donnelly. May they and all deceased past pupils rest in peace. There was a sizeable attendance of current and past pupils present at he Mass and afterwards at lunch in the Grand Canal Hotel. John Murray had his camera at the ready and below are a few of the photographs taken. Many thanks John. 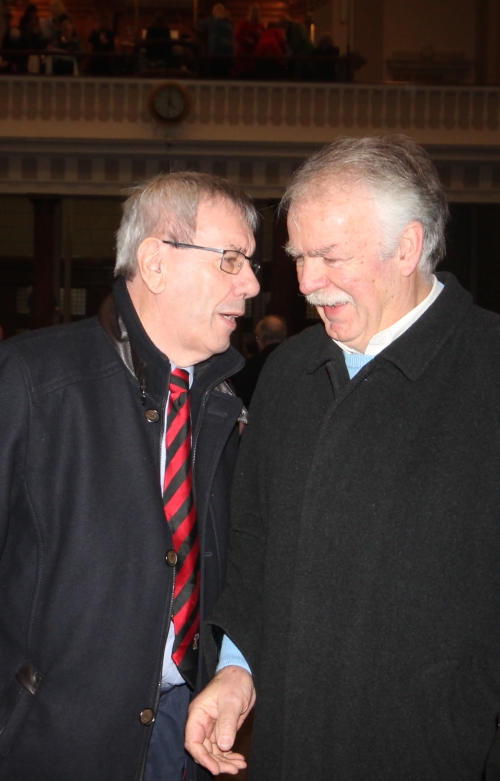 PPU President Brian Duncan has a word of wisdom for Joe Ryan, not sure if this was before or after the Mass.

Michael O’Sullivan ans his wife Irene with John Costello were at the Mass. 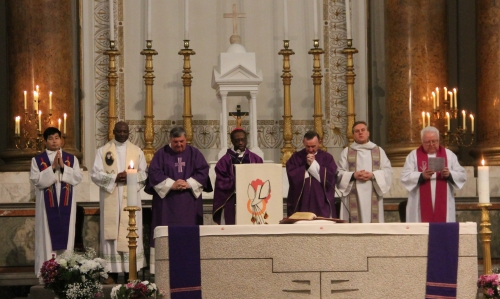 Fr. Okolo with the altar party during the Mass

Congratulations to Jerry Carroll who has been elected President of the PPU for the two year period commencing March 2018. Outgoing President, Brian Duncan handed over the historic chain of office at the AGM on Thursday March 22nd in the school. Jerry graduated from the ROW in 1962 and enjoyed an outstanding career in the Civil Service in various departments. in 1998 Jerry was appointed Director of the Bar Council of Ireland and he retired from there in the last couple of years. Jerry has been an outstanding worker for the preservation and development of the school having served as Chairman of the Board of Management for many years. He was also highly influential in securing the visit of the Taoiseach for the 150 celebrations in 2015.Jerry was elected ROW Person of the Year in 2012. He is the fourth past pupil of the Class of 1962 to be elected President, surely a record which will not be beaten by any other class group. Many thanks also to outgoing President Brian Duncan for his hard work and efforts on behalf of the PPU over the past couple of years.